Hurworth Grange is managed by Hurworth Community Association and provides a fabulous woodland and community resource in the village.  EPICH played a significant part in its rejuvenation in the 2000s, and now looks after some specific areas including the picnic table amenity area, the bird hide/feeding station, and the Community Heritage Orchard, but also contributes to biodiversity throughout, by planting native wildflowers.  It has also installed the all-weather path. 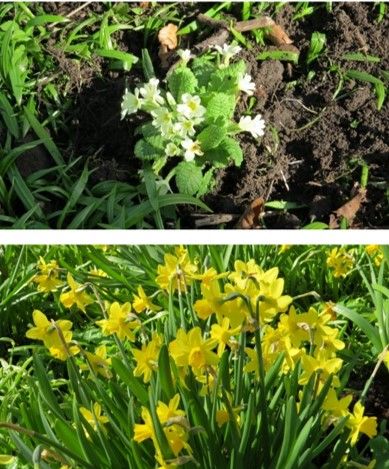 Flowers at The Grange

Along the entrance drive to the Grange, in spring, are Snowdrops, Winter Aconites, Native Primroses and other coloured Primulas, Violets, Daffodils, Anemone Blanda, and some Bluebells. These early plants are followed by Ladies Smock, Cuckoo Flower, Cow Parsley and Wild Strawberry.
The hedge by the railway track is under planted with some hedgerow species such as vetch, and poached egg plants and snowdrops for early spring show.
The sports field is bordered with daffodils and snowdrops for the spring together with some primroses and cowslips.
Among the trees on the Eastern Side is the old Pond, which dries out in summer. There are Marsh Marigolds and Yellow Flag Iris, along with Ragged Robin, Red Campion, Cuckoo Pint, Native Bluebells, and Violets.
Next to the Pond Area is Jean Butterfield’s Garden, bordered by a Low Box Hedge .
Blue vetch, buttercups and ox eye daisy appear here in Spring.
Snowdrops, crocus, primroses, cowslips and violets are found throughout the grounds - around 4000 were planted in 2015, and similar in 2016.
Along the Northern Boundary is a path through the trees with bluebells and daffodils, forget-me-knots and snowdrops. Hundreds of bulbs were planted here in 2015.  In late summer a few Autumn Crocus can be found and there are two varieties of Wild Garlic, and the three-cornered leek which is so vigorous as to prevent native bluebells becoming established.

An annual task since 2016 is the cutting back of old raspberry canes which grow up just south of the Victorian pond each year and smother the spring bulbs flowering underneath.

Trees at The Grange

Hurworth Grange Community Centre covers an approx 5.8 hectares area and is the setting for a collection of established mature deciduous and coniferous trees. The more substantial trees were clearly in existence at the time the Grange was built in the late 19th Century.
The main woodland areas are to the East of the entrance from Hurworth Road, along the northern boundary and surrounding the pond area.
The majority of the trees ( Scots Pine and Yew ) were planted in the late 19th Century and were selected in Norway by ground staff at the time. These trees were surveyed by DBC Community Services in 2006 and a detailed plan made of them. A new survey is planned for 2022.
The species in the Grange grounds include Scots Pine, Yew, Field Maple, Oak, Elm, Beech, Silver Birch, Ash, Lime, Chestnut, Dawn Redwood, Cedar of Lebanon, Sycamore, Prunus, Quince and Crab Apple.

Early Days - Friends of the Community at The Grange 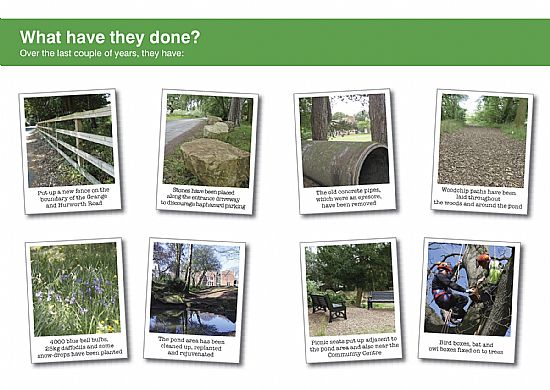